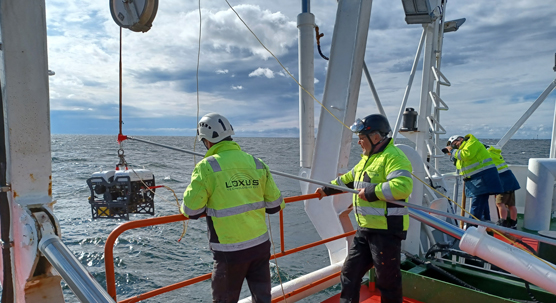 Utö, BALTIC SEA, SEPTEMER 8, 2022 – Our Finnish dealer Loxus is also an inspection service company that has been doing some very important work with their SEAMOR Chinook! Here is a quick read on how Loxus supports cleaning our seas from oil-leaking wrecks.

The marine research vessel Aranda is on the southeast side of Utö this week. A preliminary investigation of the tugboat Simson, which sank in 1978, is underway for a possible oil removal operation.

The Finnish Environment Institute is investigating a possible high-risk shipwreck southeast of Utö, close to the Archipelago National Park.

The aim of the investigation is to have Loxus, 3D model the wreck for further operations and to find out how it could be drained of oil.

The tugboat Simson lies partially sunk in the mud at a depth of about 60 metres. Working at this depth poses its own challenges. The modelling will be carried out using the hydroacoustic equipment of the marine research vessel Aranda and imaging with an SEAMOR ROV.

The wreck is located close to a nature reserve. If it were to start leaking oil, in average winds the oil would drift towards the Finnish coast and the Archipelago National Park.

Information on the wreck renovation project: www.syke.fi/hankkeet/hylkysaneeraus (in Finnish and Swedish)

Details for this article came from a press release by the Finnish Environment Institute, dated August 29, 2022