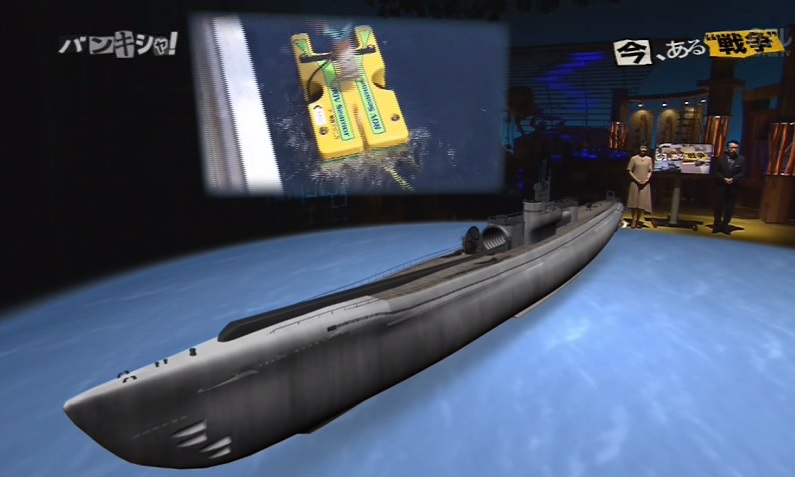 IMAGE: The SEAMOR ROV which helped find the 1-402 WWII Japanese submarine, nearly 70 years after it was sunk.

In early August 2015, a team of experts and Japanese TV crew members discovered a missing World War II icon. Off the coast of Nagasaki, the 120 meter long submarine “I-402” was located using a SEAMOR ROV. TOYO, SEAMOR’s Japanese dealer, used their 300 F 2/4 system with high definition video to seek out and then document the sunken vessel.

The search team readies the SEAMOR ROV for its dive.

A SEAMOR 300 F 2/4 with HD video capability was used by TOYO Corporation as part of the search team.

Found at 190 meters below the surface, the bright LEDs on the SEAMOR ROV were able to illuminate key features of this submarine. A pair of rails along the front of the ship were key identifiers as the I-402 as they provided a track upon which the three on-deck Seiran seaplane dive bombers were able to be launched (the I-400 and I-401, the only two other vessels of this kind, also had this capability). The crane/hoist system to retrieve the planes and the exhaust stack were also spotted and help confirm the identity of this ship.

The SEAMOR ROV lights were the only source available at 200 meters where the submarine was found.

Video from the SEAMOR ROV shows the airplane launch rails on the found vessel.

The SEAMOR ROV overlay display: this is likely part of the exhaust stack of the I-402.

The Sen Toku I-400 series of submarines were a remarkable trio of military vessels. Built in 1944 the I-402 was one of the most massive submarines built in that era. Displacing 6,500 tons, the I-402 dwarfed other contemporary submarines. Its destination was to round South America and head for New York as America became a key target for the war during WWII. When the allied forces won the war, the United States Navy captured this vessel and brought it to Sasebo Bay for inspection – some say that it was this series of submarines that lead the way to larger nuclear submarines and aircraft carrier technology. The I-402 and several other captured ships were scuttled by the American Navy on April 1 1946 off the Goto Islands west of Nagasaki.

This artist rendering of the I-402 shows the telltale rails on which the seaplane dive bombers would have been launched.

Photos taken from 真相報道バンキシャ！ (Nippon Television Network Corporation) which featured a half-hour special about the I-402 discovery on its August 16 2015 program.  Click on pictures above to see full-sized versions of the images.