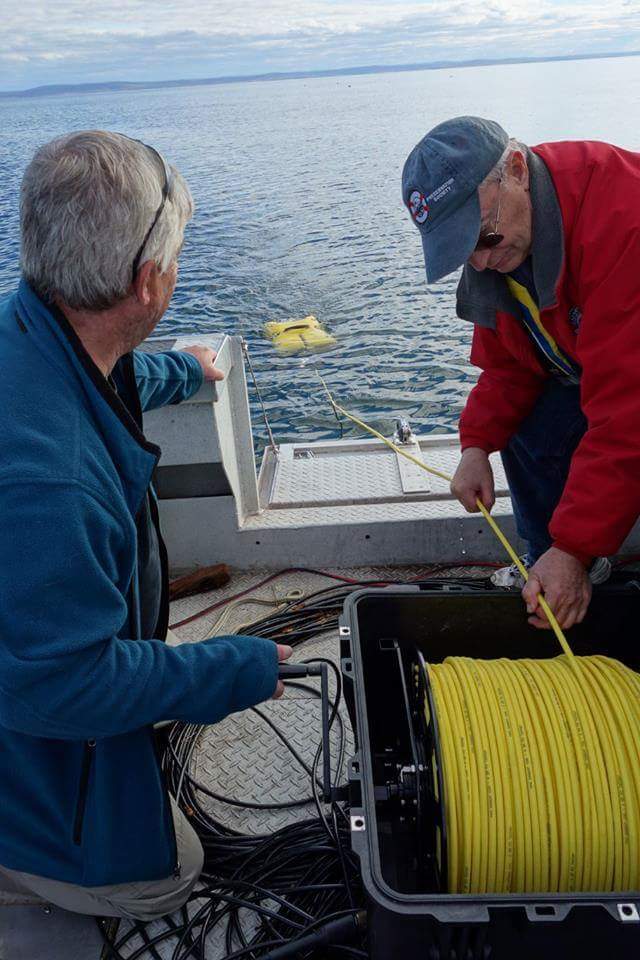 A SEAMOR Marine Chinook ROV was used to confirm the identity of a 1897 schooner barge, the Antelope, found 300 feet down at the bottom of Lake Superior near Wisconsin, USA. This ship is one of the most intact wooden schooners to be found at the bottom of the lake with its masts still standing. Its cargo (coal) may have helped the ship sink slowly, coal being a buoyant load, preventing the ship’s hull from collapsing during its descent.

After having determined the location of this 119-year-old vessel with sonar images, the shipwreck hunters, Ken Merryman, Jerry Eliason and Kraig Smith, used a drop camera to get an initial look, but needed an ROV to explore further. Diving was not a viable option given the depth and danger from the unknown condition of the wreck.

Sonar imagery of the ship – its two front masts intact.

The team sought support from the Wisconsin Historical Society, who put them in contact with Tom Crossmon, experienced ROV pilot. The Chinook ROV was a very valuable tool for this job. Our ROV’s camera with integrated lighting permitted the team of shipwreck hunters to clearly see what their sonar images hinted at – a remarkably intact wooden trading ship, with two of its three masts still standing.  Tom complemented our SEAMOR Chinook by noting how stable and well-equipped it is for deep dives. The additional lighting (our repositionable auxiliary lights) provide 1,500 lumens a piece extra to help illuminate the work site – this gives SEAMOR ROVs a great advantage when dealing with substantial particulate matter in the video.

The painted name of the Antelope was clearly visible with the ROV’s standard definition camera, confirming the identity of the ship. Photo courtesy of Tom Crossmon.

The Chinook is easily able to reach depths of 600 meters, and is quickly and easily deployed from small vessels. Unlike a diver, it is not limited by how long it can stay at the bottom of the lake floor, allowing users to get very detailed visual results to confirm findings from side scan sonar.  The shipwreck was documented for the National Register of Historic Places, in collaboration with the Wisconsin Historical Society’s Maritime Preservation and Archaeology Program (learn more here).

SEAMOR ROVs have been used in many other archaeological finding across the world.

To learn more about the shipwreck hunters and the find click here.