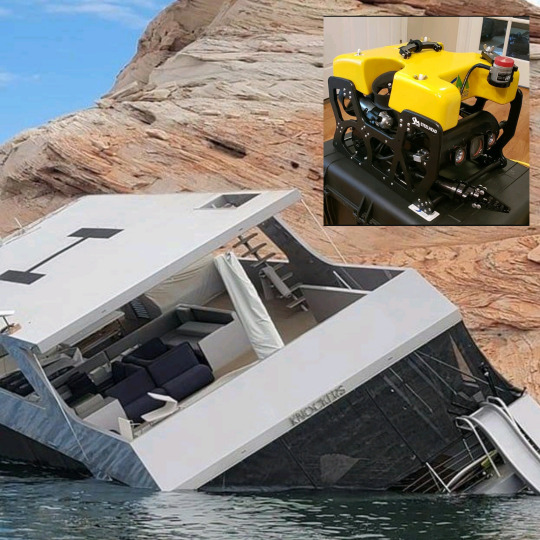 LAKE POWELL, UTAH, USA, JANUARY 7, 2023 – Monsoon like winds, rough conditions, and an overloaded houseboat made for an unfortunate incident on Lake Powell in Utah. In 2022, luxury houseboat “Knockers” rammed into a cliff-side and sunk. All passengers and crew were able to safely get to shore, as it slowly sank down to 200 metres, wedging itself on a ledge.

Cross Marine Projects was tasked with completing a detailed survey of the Knocker’s condition, to facilitate a plan of action that will involve clearing the boat to an empty shell, recovering all fuel from aboard, and securing the craft as a man-made reef for future aquatic and diving use. Having used SEAMOR systems in the past, Cross Marine’s President, James Cross, decided to purchase a new Steelhead ROV with an Imagenex 852 Ultra-Miniature Sonar for the job.

In phase one of the project, Cross’s team completed a detailed survey. Again, the weather was not kind to them as they performed the survey; topside waves were between 4 and 6 feet high. The wreck site also posed challenges in itself:  being, inside the narrows of the lake, park services needed to police boats coming either way, to slow down the boat traffic and avoid collisions with Cross’s craft. Flash flooding from the feeder river caused extremely poor underwater visibility for the expert ROV pilot. “This is where SEAMOR ROV capability to manually dim lights and focus the camera made the job a success. Everyone involved was extremely impressed with the video quality”, said Cross.

Next steps of the project will happen in late February and early March, when Cross’s team will return to retrieve the watercraft dangling from the Knocker, secure lines, pump out fuel, and recover small items from the lake bottom.

Upon completion of this successful first phase of the project, Cross shared these words of appreciation for SEAMOR. “We at Cross Marine Projects are incredibly happy to be collaborating with SEAMOR once again in accomplishing a very difficult project. SEAMOR’s systems have been greatly beneficial in operating under the most extreme conditions to gather needed data. Parties at all levels, including the involved government agencies, were amazed at SEAMOR ROV’s performance and quality.”

More to come! SEAMOR will create a full case study when this project is complete.