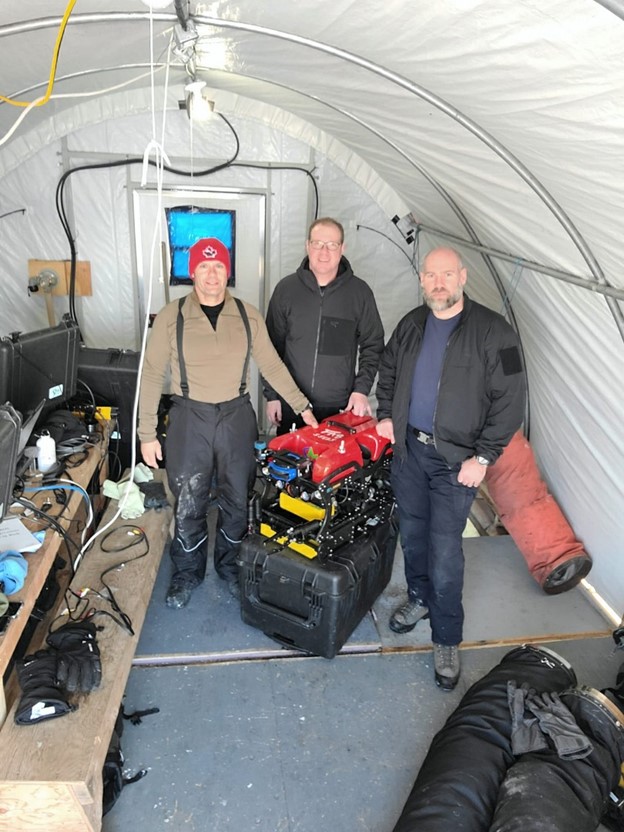 NANAIMO, BRITISH COLUMBIA, CANADA, MARCH 1, 2022 – Last month in a tragic workplace accident in Nunavut, Canada, a bulldozer broke through the ice and was submerged to a depth of 160 meters. A highly skilled team of Canadian Police underwater investigators responded with SEAMOR Marine’s Chinook ROV, recovering the victim’s body from inside the bulldozer on the Arctic Ocean floor. It was the Canadian Police’s deepest underwater recovery in history and first operational dive above the Arctic Circle.

“My heart goes out to the family, friends and co-workers of the operator,” says Robin Li, President of SEAMOR Marine. “It’s a devastating tragedy. We commend the efforts and technical skill of the police team on this difficult recovery mission, and we’re grateful that our ROV could make it possible for the victim to be returned to his family.”

The accident occurred at Bathurst Inlet in Western Nunavut during the widening of a 170km ice road between the port facility and the Back River gold mining project site. The conditions at this remote location were extreme: 5ft to 6ft thick ice, air temperatures of -41C with a windchill of -53C, and a 160m submerged depth well beyond the capacity of most divers.

“The recovery and investigation was done at significant depths and latitude, both of which was one of the most, if not the most complex recovery to date for the RCMP,” says British Columbia RCMP Superintendent Jim Elliott.

On the first day of the operation the Chinook ROV navigated to the bulldozer door using the integrated underwater GPS (USBL) and onboard multibeam sonar, live HD video cameras and specialized lighting. Then, with the help of the attached BluePrint Labs 5-function Alpha Arm and a rope cutter jaw, the Chinook ROV cut through a polysteel line and cleared away the other entangled ROV.

The second day of the operation involved opening the bulldozer door, the point where the other ROV had failed. Using a second arm to manipulate the door handle down 90 degrees, the Chinook ROV successfully opened the door and retrieved the bulldozer operator’s body.

“Our ‘Fab’ [the team’s name for its SEAMOR ROV] accomplished all tasks required and worked like a champ above the Arctic Circle,” said Jay White, coordinator at the NURTC and leader of RCMP national diver training program.

The team at the NURTC affectionately named their SEAMOR Chinook ROV ‘Fab’ after Fabrice Gevaudan, an RCMP diving colleague and friend who lost his life in the line of duty. The crew that named ‘Fab’ was the same crew that deployed ‘Fab’ to help complete this Nunavut recovery mission, the deepest recovery in RCMP history.

“We are proud to assist RCMP teams like this one who push the limits of what is possible with hard work and advanced tools, and we sincerely hope the successful recovery in Nunavut will help bring comfort and closure to the family of the bulldozer operator,” says Li of SEAMOR Marine.

Based in Nanaimo, British Columbia on Vancouver Island on Canada’s west coast, SEAMOR Marine Ltd. designs and manufactures underwater observation and inspection-class remotely operated vehicles (ROVs) and modular accessories. SEAMOR sells worldwide and has ROVs operating on every continent and in every major body of water around the globe. The company’s ROVs have been used in a variety of fields including aquaculture, underwater archaeology, Antarctic geology, and pipeline and dam inspection. SEAMOR has collaborated on research projects with NASA, the Defence Research and Development Canada, and the Department of Fisheries and Oceans.